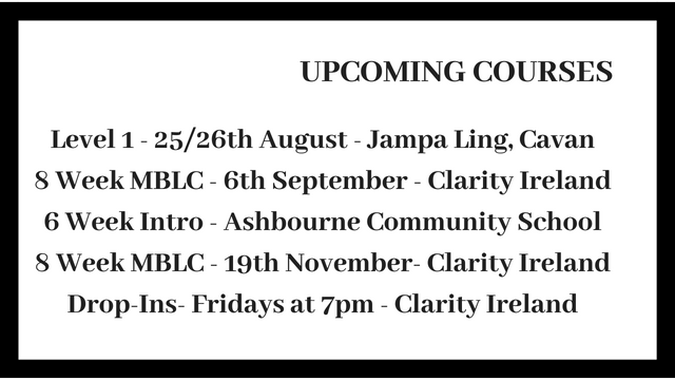 What are the Benefits of Practising Mindfulness?

“The intention of mindfulness is to heighten self-awareness, become more aware of factors that influence behaviours tendencies, and act in ways that reflect skill and compassion toward oneself and others” (Salmon et al., 2004, pg.435).


Reduced rumination. Several studies have shown that mindfulness reduces rumination. In one study, for example, Chambers et al. (2008) asked 20 novice meditators to participate in a 10-day intensive mindfulness meditation retreat. After the retreat, the meditation group had significantly higher self-reported mindfulness and a decreased negative affect compared with a control group. They also experienced fewer depressive symptoms and less rumination. In addition, the meditators had significantly better working memory capacity and were better able to sustain attention during a performance task compared with the control group.

Stress reduction. Many studies show that practicing mindfulness reduces stress. In 2010, Hoffman et al. conducted a meta-analysis of 39 studies that explored the use of mindfulness-based stress reduction and mindfulness-based cognitive therapy. The researchers concluded that mindfulness-based therapy may be useful in altering affective and cognitive processes that underlie multiple clinical issues.
Those findings are consistent with evidence that mindfulness meditation increases positive affect and decreases anxiety and negative affect. In one study, participants randomly assigned to an eight-week mindfulness-based stress reduction group were compared with controls on self-reported measures of depression, anxiety and psychopathology, and on neural reactivity as measured by fMRI after watching sad films (Farb et al., 2010). The researchers found that the participants who experienced mindfulness-based stress reduction had significantly less anxiety, depression and somatic distress compared with the control group. In addition, the fMRI data indicated that the mindfulness group had less neural reactivity when they were exposed to the films than the control group, and they displayed distinctly different neural responses while watching the films than they did before their mindfulness training. These findings suggest that mindfulness meditation shifts people's ability to use emotion regulation strategies in a way that enables them to experience emotion selectively, and that the emotions they experience may be processed differently in the brain (Farb et al., 2010; Williams, 2010).

More cognitive flexibility. Another line of research suggests that in addition to helping people become less reactive, mindfulness meditation may also give them greater cognitive flexibility. One study found that people who practice mindfulness meditation appear to develop the skill of self-observation, which neurologically disengages the automatic pathways that were created by prior learning and enables present-moment input to be integrated in a new way (Siegel, 2007a). Meditation also activates the brain region associated with more adaptive responses to stressful or negative situations (Cahn & Polich, 2006; Davidson et al., 2003). Activation of this region corresponds with faster recovery to baseline after being negatively provoked (Davidson, 2000; Davidson, Jackson, & Kalin, 2000).

Hypertension - Meditation training has been shown to reduce blood pressure in amounts comparable to the changes that are produced by medication and other lifestyle modifications such as weight loss, sodium restriction, and increased aerobic exercise (Schneider 1995, Linden & Chambers 1994, Alexander 1994).

Cancer - A randomized trial with cancer outpatients showed Mindfulness-Based Stress Reduction (MBSR) was effective in significantly decreasing mood disturbance (65%), including depression, anxiety, anger and confusion, and also in decreasing the symptoms of stress such as cardiopulmonary and gastrointestinal symptoms (Speca 2000). These changes were sustained at six month follow up (Carlson 2001). Survival rates of both melanoma and metastatic breast cancer patients have been significantly improved by relaxation and meditation training (Fawzy 1993, Speigal 1989) and psychological distress was lessened in women with early breast cancer (Bridge 1988).

​Chronic Pain - Mindfulness meditation has been shown to reduce both the experience of pain and its inhibition of patients’ everyday activities. Further, mood disturbance and psychological symptomatology (including anxiety and depression) are also reduced. Pain-related drug utilization was decreased and activity levels and self esteem increased. This was in marked contrast to a traditional pain clinic comparison group, which showed no change on these dimensions (Kabat-Zinn 1982, 85). These gains were nearly all maintained at four-year follow-up (Kabat-Zinn 1987).

Irritable Bowel Syndrome - Meditation training has been shown to be effective in improving this condition (Blanchard 1992).

Anxiety - Mindfulness training has been shown to clinically reduce symptoms of anxiety, psychological distress and secondary depression (Kabat-Zinn 1992). These changes were maintained at 3-year follow-up (Miller 1995).

Asthma/Respiratory Disorders - Relaxation training has been shown to improve the psychological well-being, functional status and frequency of attacks of asthma patients as well as adherence to treatment (Devine 1996). It has also been shown to have a beneficial effect on dyspnea and psychological well-being among adults with obstructive pulmonary disease (Devine & Pearcy, in press).

Headache - Meditation has been shown to decrease headache activity (Anastasio 1987).

Depression - The skills derived from mindfulness training and cognitive therapy have been shown effective in significantly reducing the recurrence of major depressive episodes in patients who have been treated for depression (Teasdale 2000).

Multiple Sclerosis - Training in mindfulness of movement resulted in MS patients reporting improvement over a broad range of symptoms, including balance (Mills 2000).


Published Research on Mindfulness Benefits for Parents of ASD Children
http://onlinelibrary.wiley.com/doi/10.1111/j.1365-2788.2005.00732.x/full
http://www.sciencedirect.com/science/article/pii/S1750946714000361
http://psycnet.apa.org/journals/dev/48/5/1476/
http://www.aaiddjournals.org/doi/abs/10.1352/1944-7558-119.2.171?code=aamr-site
http://journals.sagepub.com/doi/abs/10.1177/10634266060140030401#
http://www.aaiddjournals.org/doi/abs/10.1352/0895-8017(2002)107%3C0222:BPOCWA%3E2.0.CO;2
http://link.springer.com/article/10.1007/s12671-012-0099-0
https://www.cambridge.org/core/journals/behavioural-and-cognitive-psychotherapy/article/div-classtitlemindfulness-training-for-adolescents-with-externalizing-disorders-and-their-parentsdiv/BCD33A1D6B9944B406A3B798EA2E89C1
Interesting published researches and Harvard explanation on how mindfulness can change your brain and improve your health
Click HERE
Brilliant TED Talk with Zindel Segal who is professor of psychology at University of Toronto, Segal combines mindfulness with conventional cognitive behavioral therapy, which teaches patients to develop a different relationship to sadness or unhappiness by observing and without judgment. Presently he is Distinguished Professor of Psychology in Mood Disorders in the Department of Psychology at the University of Toronto Scarborough. He is also the Director of Clinical Training in the Graduate Department of Clinical Psychological Science.
Excerpt from American Psychological Association
By Daphne M. Davis, PhD, and Jeffrey A. Hayes, PhD. July/August 2012, Vol 43, No. 7